skip to main | skip to sidebar

Yes, it happened: Live video streaming has come to the iPhone courtesy of Ustream.

In a move that many suspected would never happen — surely the carriers would loathe the increased data usage resulting from such apps — Apple has approved the Ustream Live Broadcaster application, bringing live streaming video straight from the iPhone to the uStream Web site and any embedded players posted around the Web.

The app works on 3G and Wi-Fi connections, supports yes/no polling of viewers, displays chatroom messages, serves up a viewer count, can transmit your location via GPS and allows you to adjust the resolution.
Posted by John Costilla at 11:01 AM No comments:

Thanks to Miguel for posting and sharing!

Access presentations/slideshows for Virtual School Symposium 2009
Here are a few podcasts--in no particular order and in OGG format--from the Virtual School Symposium 2009 Conference...sorry to take so long to share them. These were actually recorded by a colleague to whom I gave a digital audio recorder. Unfortunately, I didn't get much identifying information from her so I will count on you to listen carefully!

Posted by John Costilla at 8:17 AM No comments:

K12 Online Conference is up and running!

The K-12 Online Conference invites participation from educators around the world interested in innovative ways Web 2.0 tools and technologies can be used to improve learning. This FREE conference is run by volunteers and open to everyone. The 2009 conference theme is “Bridging the Divide.” This year’s conference begins with a pre-conference keynote by classroom teacher and international educator Kim Cofino the week of November 30, 2009. The following two weeks, December 7-11 and December 14-17, over fifty presentations will be posted online to our conference blog and our conference Ning for participants to view, download, and discuss. Live Events in the form of three “Fireside Chats” are listed on the events page of our conference Ning and Facebook fan page, and live events will continue in 2010 through twice-monthly “K-12 Online Echo” webcasts on EdTechTalk. Everyone is encouraged to participate in both live events during and after the conference as well as asynchronous conversations. Over 122 presentations from 2008, 2007, and 2006 are available, along with archived live events. Follow the K12 Online Conference on Twitter and Facebook!

Presentation Description: Learn about the what’s, how’s and why’s of using web 2.0 tools and social networking with elementary age students to enhance learning and student engagement.

Posted by John Costilla at 8:12 AM No comments:

(Change from my traditional blog posting… then again this is life and then some.)

I could not sleep tonight... All day yesterday, I have known that one of my closest friends is coming upon the biggest battle of his life this day. Today Jim will undergo a 12 hour surgery to try and rid his body of this deadly disease. And through it all, he has remained steadfast to his faith and commitment to fight the fight. At 7AM today, he will begin his next step in his journey that he has been leading. Through it all, he has remained a rock; a man on a mission guided by his trust and faith in God. Me on the other hand, I’ve been a nervous wreck. He called me last night at 11:30pm from his prep room to let me know that he was good. It was amazing to me, that through all that he will face today, he called me to see if I was up and not to worry. We said a short prayer together, laughed a bit and I shared with him that so many of you were out there sending your prayers out for him. Of course, he was thankful and gracious as always.

I have known Jim Elliott for close to 10 years. We have worked together in the past at a previous company and recently joined forces again at our current company. He is truly an inspiration to me and so many.

This Saturday is October 31st , a year ago my physician called me and told me I have appendecial adeno carcinoma and it at a stage 4.

A little more than a year ago, I received a call from Jim giving me the news of his acknowledgment of his stage 4 cancer. This was overwhelming for me and I can only imagine how he and his family were taking it all in. Obviously the worst came to mind. I vowed to call him everyday to keep his spirits in check and quite frankly, to keep my own spirits in check. Jim did a much better job of checking on me to see if I was okay. Shortly after, he began a CaringBridge blog site to keep those of us up to speed on his progress and his journey. 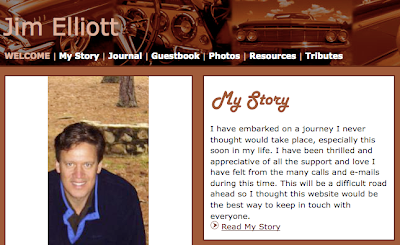 So tonight, not being able to sleep, I decided to go through all of Jim’s blog posts from day one, Oct. 2008 to December 2nd, 2009. As I read through each of his posts throughout the past year, a common theme became very clear to me – Courage, Faith and Love. Much of Jim’s writings seldom focused on the negative or sadness that such a disease brings. Rather, much of what he shares has to do with the strength he gains from all of the support and prayers of those around him. Also much of what he shares is the gain in closeness to God. Throughout many of the posts, he writes of how ‘thankful’ he is for the journey. It is truly amazing to me that in a time of despair and uncertainty, his outlook on life and the journey are filled with courage, faith and love.

So after reading all of his posts tonight, I pulled out a few of his comments and quotes and thought I would share a years worth of reflection from Jim Elliott.
(This is a song he referenced in his blog post Wednesday, February 4, 2009
http://www.caringbridge.org/visit/jimelliott/journal/15)


Although many of us have said a few prayers for his support and healing, I believe his prayers and strength have touched each on of us even more. I know I am a stronger person because of the example and courage he has exemplified in his current journey.

So today, I ask that you take some time to pray or pause for the healing and successful surgery that he is undergoing today. I hope to hear from his family later tonight with word on his big day. As he so often says… “your prayers are what keep me going… God is good.”
Posted by John Costilla at 3:55 AM No comments:

John Costilla
Welcome.
I am John & this is my ED Social Web blog spot.

John is husband, father and gadget guy. John is an educator, a marketer and community development guy in the K12 education space.

Life and then Some by John Costilla is licensed under a Creative Commons Attribution 3.0 United States License.